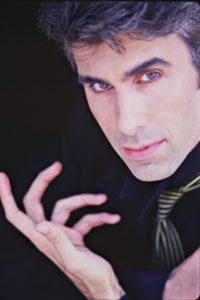 “The man with the movie star hand,” and “The most famous right hand in Hollywood” is just two of the quotes reviewers have used to describe the talents of master magician Christopher Hart.

This came following his featured role as “Thing” the expressive disembodied hand in the film “The Addams Family,” and its sequel “Addams Family Values.”

More than just talented digits, Hart gets to use his whole body in the performance of his multi-award winning magic act.

Fueled with inspiration and hard work, Christopher purposely created his magic and set it to music. He soon found that it broke down all language barriers, and Hart found himself working all over the world. Japan, China, Germany, South America, Canada, and Denmark is just a ‘hand-full’ of the places Christopher has performed his magic.

Christopher reflects, “I’ve found people and cultures all over the globe are fascinated with magic; it really is a universal art form that create feelings of wonder and joy; and that’s why I do it.”

Most recently Christopher has stretched his acting muscle past his right wrist. He has been performing over 6 months in the show “Triple Espresso” as the magiciancharacter of “Buzz Maxwell” in a San Diego theatre.”I love pushing myself and working on new things” says Christopher. “It keeps my life challenging and never gets boring.”